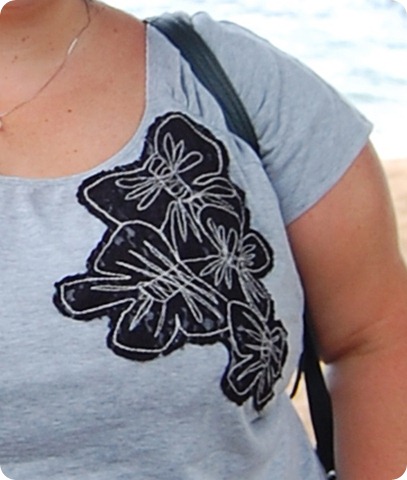 Here’s a version I did on an old white Shade shirt. It’s my scribbled daisy applique. Hmmm….maybe I’ll actually wear such a boring shirt now…..cause it ain’t borin’ no more! I can’t wait until I wash it and the edges get all frayed. Uber cool. 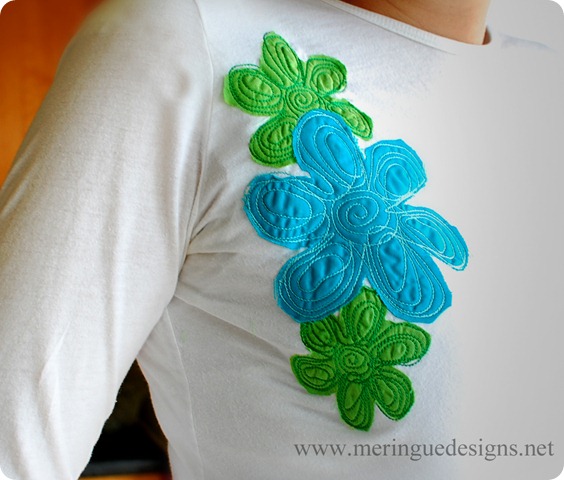 Tip for appliquéing more than one appliqué at a time in the hoop: If you can “fast forward” and jump around the thread colors, then stitch  like items together, that way you aren’t removing the hoop to cut away the fabric too many times. In the above shirt I jumped around on my screen “grouping” similar stitches for the green daisies together. That way I only removed the hoop from the machine twice to cut away excess fabric—once for the green daisies, and once for the turquoise. On my screen it’s fairly easy to see how I can jump around between color changes but even on my old ‘less fancy’ embroidery machine I could jump around. 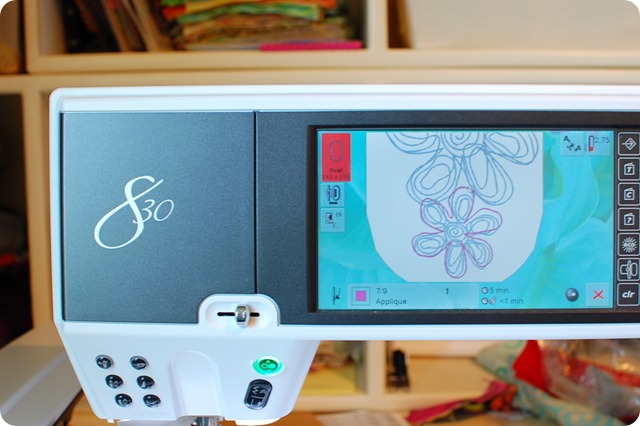 Here’s a version I did with two of my Spirograph designs. Remember spirograph for those us who were kids in the 1980s? So completely loved spirograph! 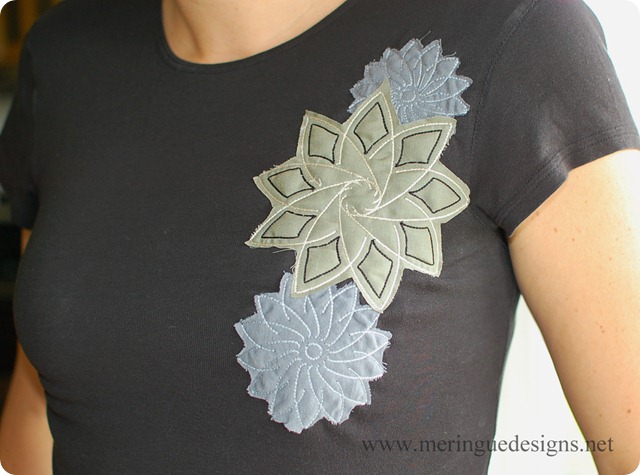 Here’s a shirt I did for my daughter with my scribbled rose design. Uber cute. 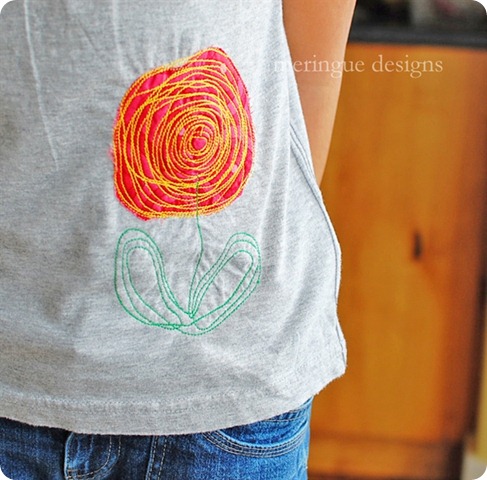 Thankfully summer is coming and I see many more t-shirts in the making.
4 comments:

Last week was spring break so we all went to Hawaii. We planned this for a full year.
We spent 7 days on Oahu. Just glorious. I took over 500 pictures but will only bore you with a few. Paul and I went to Hawaii in 2007, but I think I had even more fun this time. (Hence the title, my first post on Paradise Found can be found here, but it’s more boring than this post I’m sure.)
What I love about Hawaii is that I can actually swim in the water. Notice how flat and swimmable? This is Waimea Bay on the North Shore (5 miles from our condo, sweet!) which is actually a great surf spot in the winter. I grew up in California and frequented Huntington Beach which in my opinion is hardly swim-able—the water is freezing, the waves knock this fraidy-cat swimmer down, and the water is anything but clear. 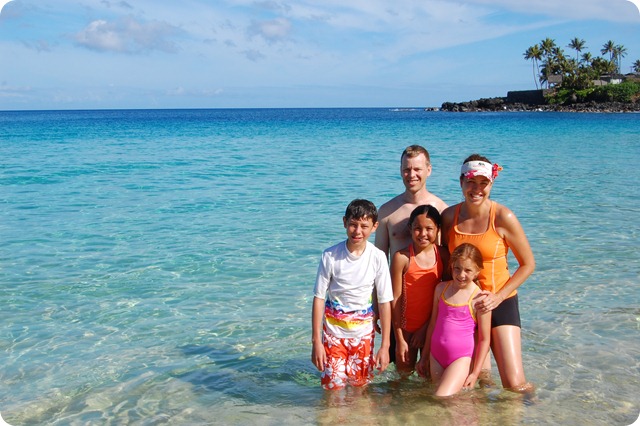 My goal was to hit as many beaches as possible. A lofty goal, but I was up to the task. It’s a small island, so I think we did pretty ok at hitting all the major ones.
This is at Kailua Beach.  The softest sand ever. I wanted to kayak out to that island, but again, I’m lazy and cheap so swimming and sunning made me perfectly happy. 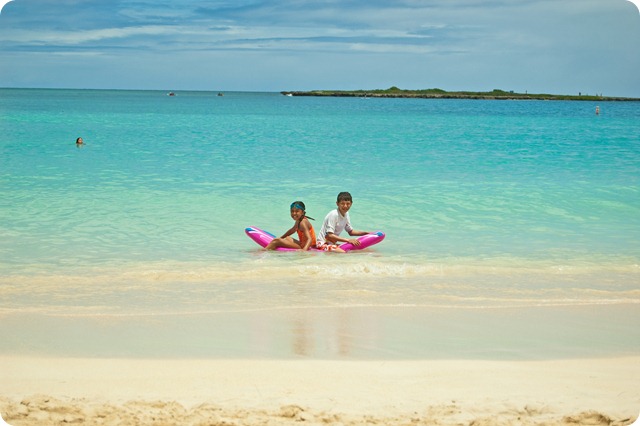 And this is Kokololio Beach in Laie. Poor Ilene, those teeny waves made a mess out of her gorgeous hair and from the looks of this picture, she had to pull her pants up! 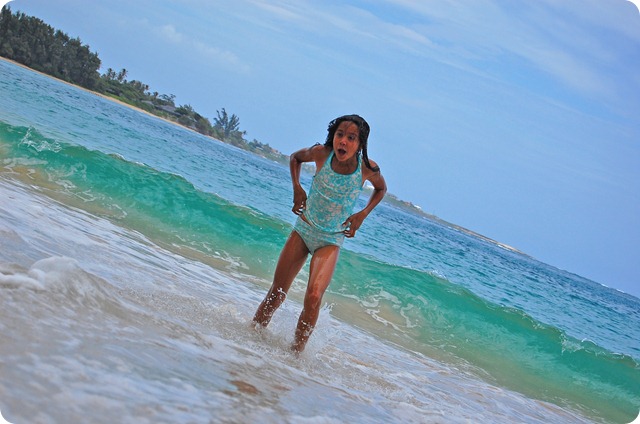 This is Ali’i Beach (below)—right outside the door of our condo. This pic was taken at 8am when the kids were taking there morning swim/snorkle. Yea, it’s that warm even at 8am. We stayed in Haleiwa on the North Shore. After staying in Waikiki last time I swore I’d never stay there again. Waikiki in Honolulu is just a large city—totally reminded me of Los Angeles. No thanks. But Haleiwa is what I think Hawaii should be—rural, small, and oh so country. 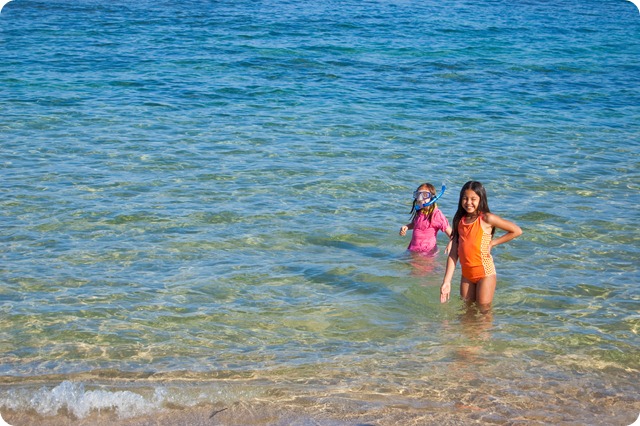 Pearl Harbor of course is a must. So proud to be an American. 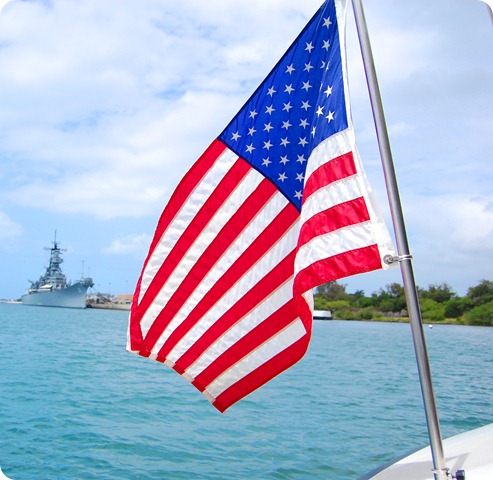 The USS Arizona memorial is a work of art. And the feeling there is of reverence and respect. 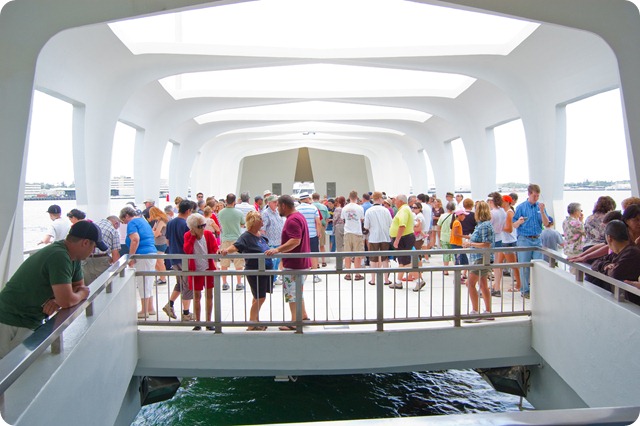 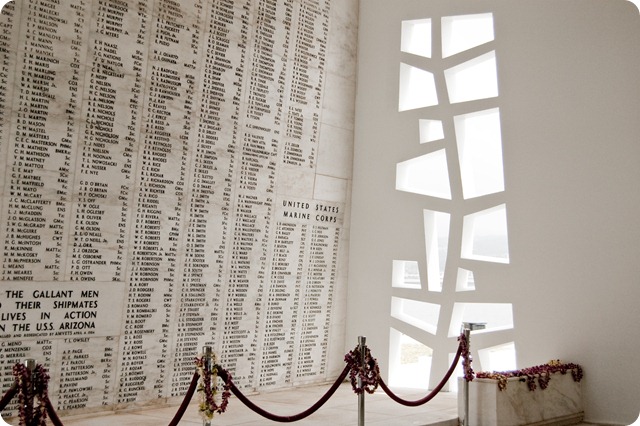 We went to Waimea Valley again because it’s just so, well….you can see for yourself….plain gorgeous. Love water lilies. 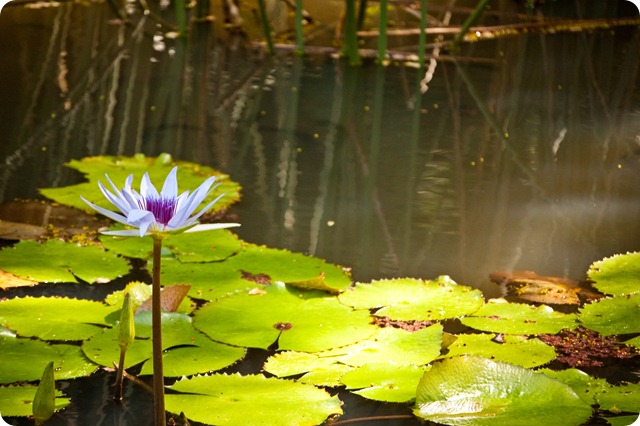 I keep thinking of ways we can live there, but I just don’t think it is in the cards. (*sobs*)
I was never once cold while there. If you know me, you know that I am always cold. (Except for July-September.) I hate winter, I hate snow, and I’m so stinking tired of wearing jackets now that it is April. I was ready to go postal. Hawaii was a respite from all of that.
Don’t I look happy in my skirt and sandals (ok, so you can’t see my sandals, but trust me, I ain’t wearin’ snow boots).
Oh bless you Hawaii, I hope to see you again soon. 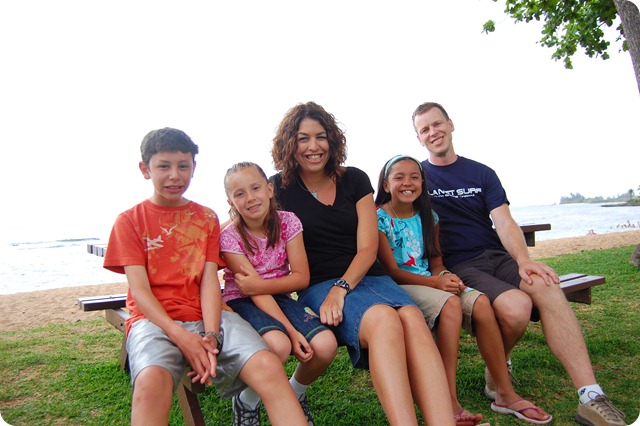 For teacher appreciation week I didn’t have much time. But I definitely wanted my kids’ teachers to know how much I appreciate them. (At least the kids’ teachers in elementary school. Not sure how to do gifts for 7 teachers in junior high.)
These little 5x5 inch zipper pouches are made in about 10 minutes. The embroidery on the black canvas also took about 10 minutes each, so in less than one hour I made two little gifts for some awesome teachers. We all need a little make up bag for our purse don’t we? Yup, I couldn’t live without my powder compact and lip gloss. 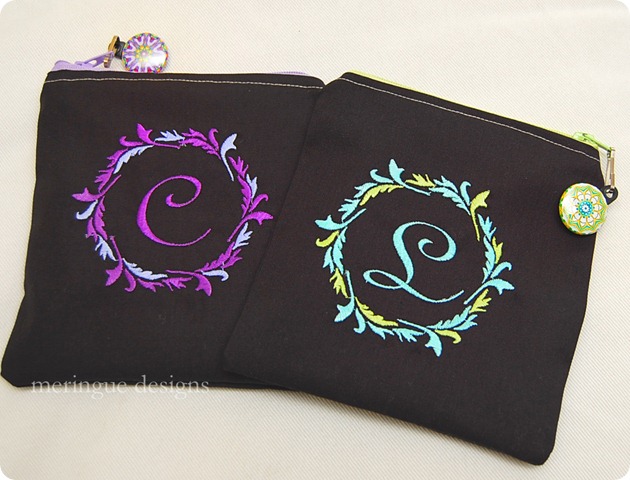 The monogram is my Roman Wreath design. You can stitch it with the included letters or you can use the blank wreath and add your own letter.
Oh, and the little 5” zippers and awesome zipper pulls came from zipit on etsy. I’ve never seen pulls like that—love them. Can’t wait to add them to anything with a zipper. I assume you all know how to make these super simple zippy pouches, but if not, just google “how to make a zipper pouch” or watch this video I found on youtube. This video is almost exactly how I make my pouches only I shorten the zipper (if necessary) before hand and I do not use lining since I used canvas for the exterior. 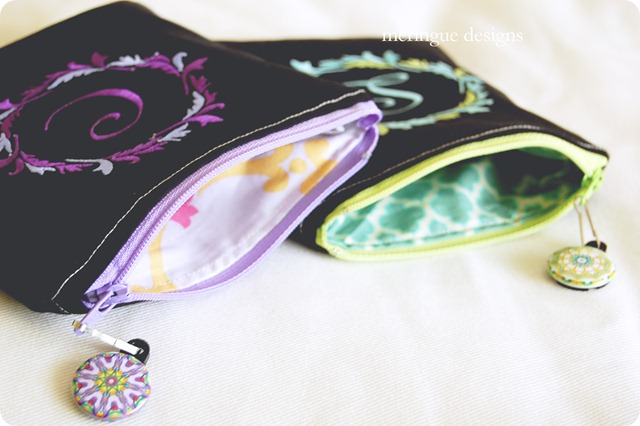