Don't Quote Me On That 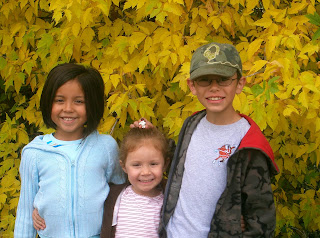 Inspired by that mom on youtube.com who made up lyrics to the William Tell Overture, I've been keeping track of what words come out of MY mouth to my kids. It ain't pretty. 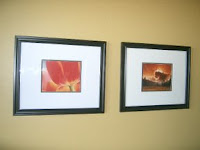 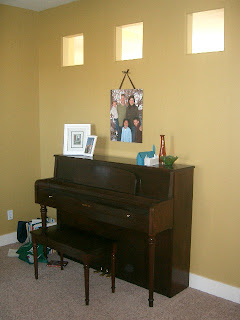 I have no desire to be a photographer but I am completely enamored with fine photography. I just bought this tulip photo off of etsy.com. I framed it and wanted to share it with you all. I think it's glorious and not just because tulips are my favorite flower. (You knew that, right honey?) My father is an amateur photographer (who takes my family photo each year) and my brother, Mike Harrington, is a

professional one for Super Chevy Magazine. Mike took the photo on the right of the clouds at sunset. (Yes, I know that is a huge wall and it could use more frames--I'm getting there.) That picture was taken at Heart Bar campground where as kids we camped at least 100 times. My dad and bro are super duper talented in this area. Thank goodness because I am slowly filling my house with framed art from those I know and those I wish I knew. Hooray for artists. 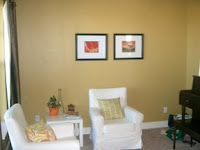 Most of you know I have been selling on etsy.com for about 6 weeks now. I thought I’d tell ya a little bit about what I’ve learned as I’ve just about hit my 50th sale.

1. I’ve learned that some customers want a bargain no matter what. I’m sorry but it you have $150 to spend on three of my purses you don’t need to ask for a shipping discount! You loaded! 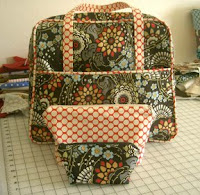 2. I’ve learned that to ship to Singapore is a rip-off. Is the package being delivered by elephant? Why so much moo-lah?
3. I’ve learned that I can make as much money as I want to. Meaning, if I could sew 4 hours a day I could make a lot more. This is quite the trial for me as I am a good capitalist American and LOVE to make money. There is literally a devil on one shoulder telling me that money is everything and an angel on the other shoulder telling me to read to my kids and clean my house. Nobody pays me to clean my toilets but people will pay me to make ‘em some pillows. Curse housework.
4. I’ve learned that compared to many other sellers on etsy.com I sell pretty normal stuff. These mesh glasses are the weirdest item I’ve seen yet.
5. I’ve learned to love the post office. They ain’t as evil as I thought. (Except of course for the ones who shoot people dead when they’re having a bad day.)
6. I’ve learned this week that I earned enough money to pay for myself to go to Hawaii! (Leaving in 15 days, not that I’m counting.) Hip hip hooray!
3 comments: 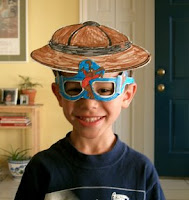 On Saturday I took Nathan to get his haircut—just the two of us. When I drove around alone with Nathan I try to keep the radio turned off so that this boy who doesn’t talk much may actually talk! Here is our conversation:

Nathan: Mom, if somebody didn’t want their house anymore, and wanted to build a new house, they wouldn’t have to tear it down. They could just burn it down!
Mom: No, Nathan. I don’t think someone is allowed to just burn their house down.
Nathan: Why not? Because it might catch someone else’s house on fire?
Mom: Yes, but also, most people, including us, don’t own our home outright yet. We are still making payments to the bank, so really, it’s the bank’s house and they don’t want us burning their stuff down.
Nathan: But once you pay it off, and it’s yours, you could burn it down right?
Mom: Nathan, why would someone pay off their house only to want to burn it down?
Nathan: Maybe it’s old and they don’t like it. Maybe they want to build a new house!
Mom: In that case, they could just re-decorate it. Or move. People don’t usually burn their houses down when they are tired of them. Houses are just too expensive for that.
Nathan: Oh. Well, if it's illegal to burn it down, how could they tear it down? With a big wrecking crane?
Mom: Sure, whatever.

Maybe I should just keep the radio on.
3 comments: 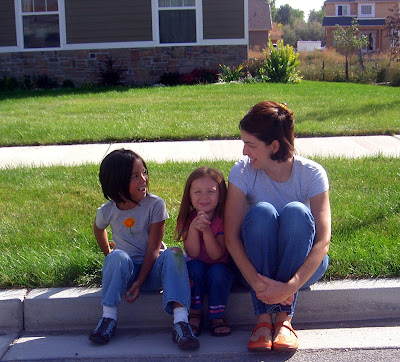 If it's possible to be in a situation where you feel you have been there before, isn't it possible to be in a situation and already be looking back at yourself years from now? I had that kind of moment today. It is a glorious fall day, the leaves are changing colors and beginning to fall. Hallie wanted to walk to get Nathan and Ilene at the bus stop today. So we walked off, hand in hand, down the street. The breeze was blowing, Hallie was singing, the leaves were falling. As we approached Nathan and Ilene, Hallie ran to them and they had a group hug. As the four of us walked home I noticed Ilene had a rip with a grass stain on her knee (click on photo above to see it in full glory) so we talked about what kind of fun patch we could put over it. In that moment, life was grand. I looked forward 20 years and realized I w 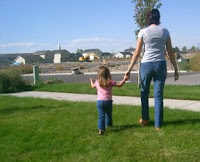 ouldn't always have three little friends who needed me that would hold my hand as I walked down the street. It was a good memory to file away in my brain because I know in five minutes someone will be screaming, "She's touching me..."
6 comments: