My mom is the greatest tamale maker.  Ever. She taught me to make them when I was a teenager and together with my siblings, we would help her make them to sell as fundraisers for our various church youth camps every summer. And we'd eat them too. I don't know where my mother got her amazing heart because I would not do this for my kids. I'd tell them to go babysit and pull weeds. Thankfully, I learned a valuable skill that makes my tummy happy year after year. 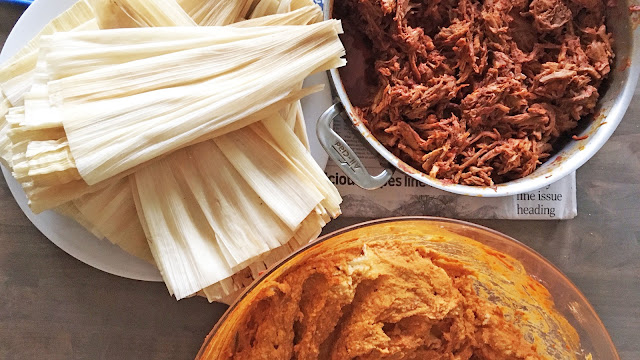 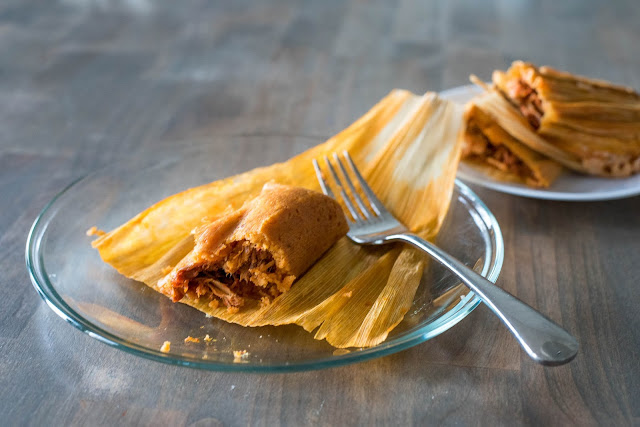 To make tamales you  need three different components: the sauce, the masa (corn dough), and the meat. My mom often makes the sauce one day, the pork carnitas another day, and assembles them all in one day. I did everything in one day. I started at 8am and finished by 3pm. I did this alone but having a helper will mean you can make more or be done faster. I wasn't in the kitchen the entire time, but I did need to be at home an entire day, no running around on this day. You can easily double this recipe but for my small family this was enough for dinner, leftovers, and plenty to freeze for 3 more dinners. 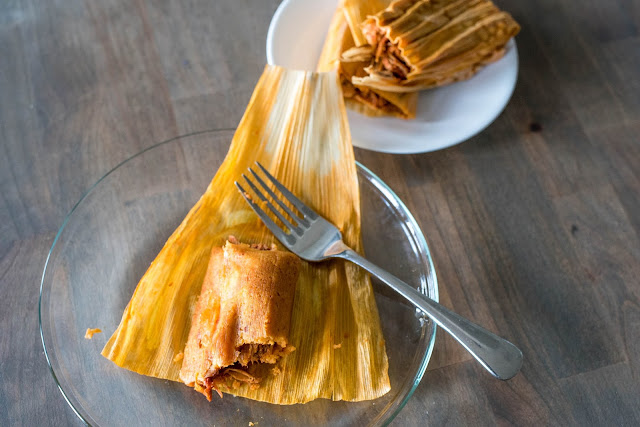 This recipe will yield approximately 4-5 dozen tamales depending on how big you make them.

Boil the pork first (see below recipe) so that you can use the leftover broth in this recipe.

Using kitchen scissors, cut off the stems of the chile pods, split down the middle with your fingers, rinse off seeds and pull off the stringy veins. You don't have to pull of all the stringy veins, just do your best as that's where all the heat is located. If your hands are sensitive, wear gloves. I don't. But I did sneeze and cough a little from the peppery 'fumes'. Saute one onion in oil with cumin and oregano about 5 minutes, then add garlic cloves, the cleaned chiles, tomato sauce, then enough pork broth or chicken broth to cover by an inch. (I added all the pork broth leftover from boiling the pork, and still I needed to add a little more water to cover by about an inch.) Bring to a boil then lower to a simmer for 30 minutes. Let it cool for 30-45 minutes then puree in blender in 2-3 batches until smooth. Add salt to taste. 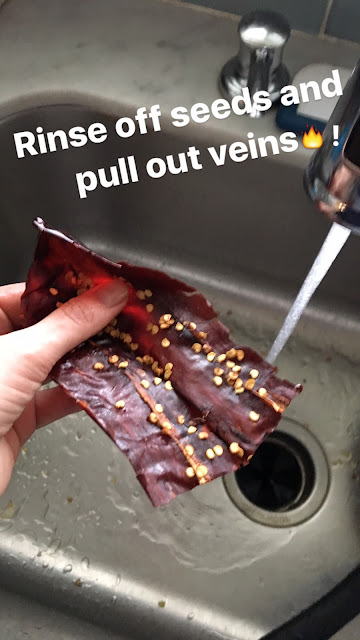 
Cut pork roast into 4-5 big chunks and cover with water in a dutch oven or large pot. Add one of the onions (just quarter the onion), 2 tsp cumin, 1 tablespoon kosher salt and 1 tsp oregano. Bring to boil then lower to simmer for 2-3 hours, until it shreds easily. Shred meat. It's very fatty so don't be worried at how much you throw out. Strain the broth and save for sauce!

Saute the last onion in oil, 2-3 cloves garlic and 2 teaspoons cumin and 1 tsp oregano, 5 minutes in a skillet. Add meat and cook another 5-7 minutes, stirring until meat starts to brown. The meat is fatty so frying it gets rid of that greasy taste and browns it nicely. Taste and season with salt.

If at all possible buy fresh prepared masa from a Latin American market. I buy mine from Rancho Market in Provo, Utah. I usually have to call a day in advance and order the dough but at Christmas they keep it out, ready to buy. Prepared masa is made from ground corn/hominy, pork lard, baking powder and salt. Your market may not add the baking powder, so you might have to add 1 tablespoon per 5 pounds. Make sure you taste it to see if there is enough salt. Mine was almost too salty so I was worried but it turned out fine. It just tastes like a raw torilla or raw cornbread at this point.

*If you can't buy already prepared masa, you'll have to buy powdered masa harina and follow the directions on the package to make your own dough with pork lard. For the love of all that's holy and decent, don't use shortening. Fresh pork lard from a butcher is best, but Manteca brand lard is also found on the shelf.

Pull masa from the fridge about 1-2 hours before you need it as it will be softer and easier to work with at room temperature. Or if like me you forget....adding the still-warm red chile sauce will warm it up fast. Which brings me the next step: you must flavor the masa with your sauce. This is what will set it apart from basic (meaning gross) tamales. Add just enough sauce, approximately 2-3 cups to moisten dough. You still want the dough thick, but more spreadable than before. Just add 1-2 cups of sauce, mix, and add more if needed. Use your hands, no spoon will mix the sauce into the very thick masa, so get dirty! Wash hands well unless you want them stained orange! Don't stress about adding the exact right amount of sauce. If you don't add enough, it's ok! Basically you want a nice orange-colored dough.

At this point you have sauced your meat and sauced your dough. You will have leftover sauce--it freezes well. I like to pour it over shredded rotisserie chicken for a fast taco dinner. Great for enchiladas as well.


Corn husks
Buy a one pound package of corn husks. You will not even use half of this package. It's nice to have extra so you can use the biggest ones and throw out the wimpy smaller ones.

Soak the entire package, in two large bowls, in warm water 30-60 minutes. Use something heavy to weigh them down because otherwise they just float. Remove from water, shake off excess, and get ready to assemble. 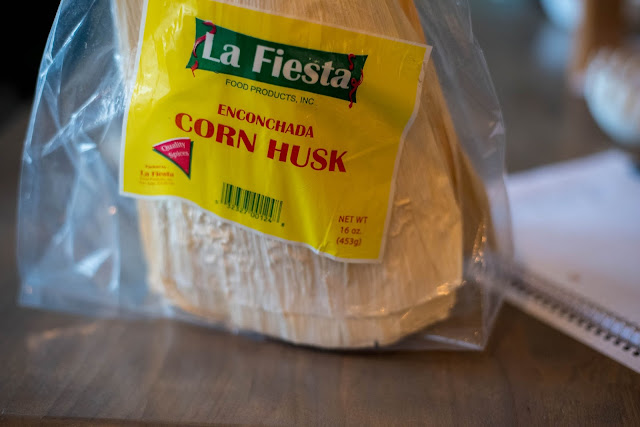 Finally you are ready to assemble! Using a spoon, spread a thin layer over the entire half of the best and biggest corn husks. Spread some pork in the middle, then fold into thirds over the meat, then in half. (Watch video.) It's ok if some are small and some are huge. I like having different sizes depending on how hungry I am. :) Stack upright in a 9x13 pan until ready to steam or freeze. 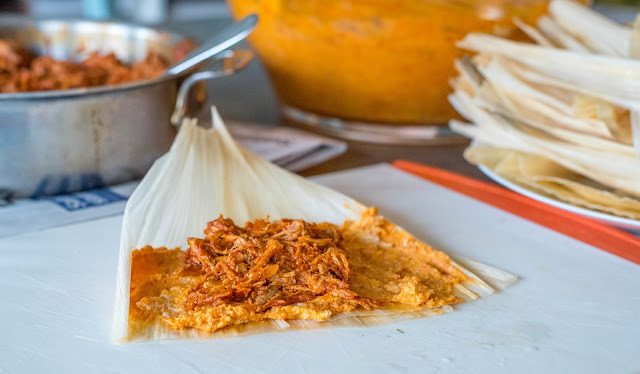 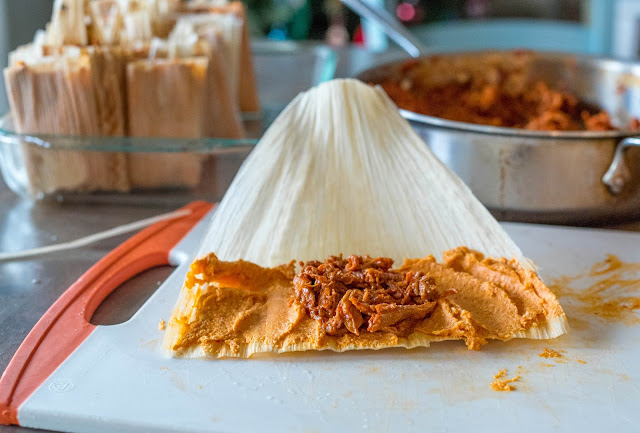 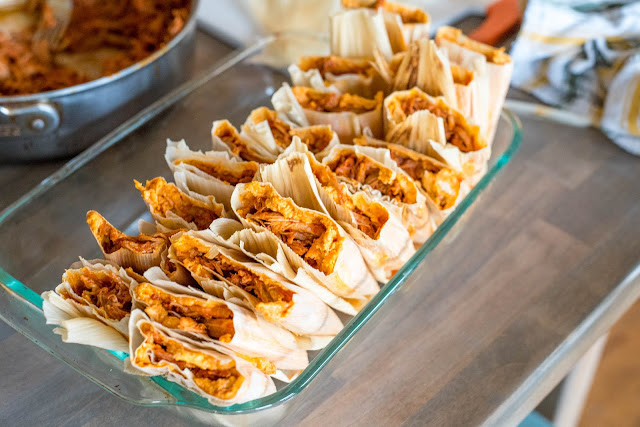 At this point, they are ready to steam. Place them upright, in a steamer basket (I use my pasta pot), fill the bottom of the pot with water but don't let the water touch the tamales! Bring to boil and lower to a simmer. Steam/simmer for 1 hour, checking pot towards the end so water doesn't run out. I have done this before and burned my pot! Turn off heat and let them sit for another 30-60 minutes in the pot. You could eat them now but like a cake, it's best to let them firm up a bit before eating them. (video below)


To freeze: Place raw tamales in large freezer bags and freeze upright so the filling won't spill out while they are freezing. Let thaw overnight in refrigerator and steam as directed above.

To reheat one already-cooked tamal: Soak a paper towel or napkin in water, wrap around the cold tamale and microwave approx. 2 minutes. If you try to just microwave it without the steam of the paper towel you will dry it out. Don't do it!!!

Such a special meal at Christmas time! 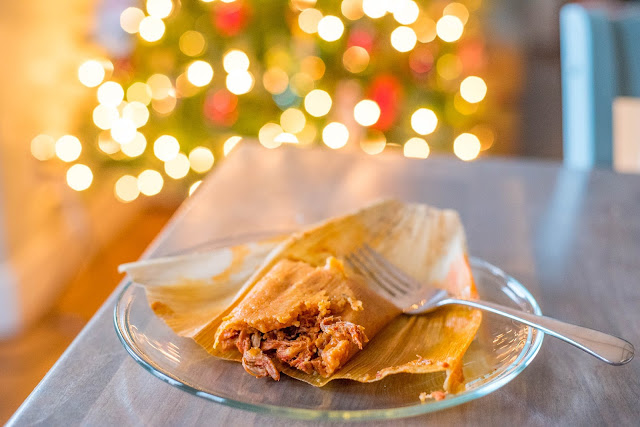 I hope this inspires you to make your own! They are a labor of love but so tasty it's worth every hour of work and every dirty pot and pan. Buen provecho!