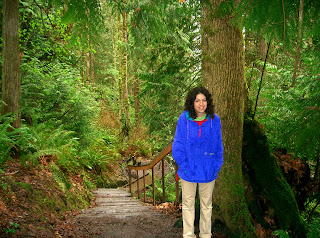 I know you’ve all been anxiously awaiting to hear about the Weekend of Cynthia part 2. If you’ll recall, last year the Weekend of Cynthia part 1 occurred in February. I had such a good time that I decided to do it all over again. (Minus me losing my lunch in a 4-star restaurant.) So last weekend I flew to Seattle to be with my dear friend Liz all over again. As I waited on the curb at baggage claim for Liz to arrive, who was late (some things never change), I decided to people watch. Lovers were reunited, a mother affectionately hugged her grown son who was wearing an army uniform, and anxious smokers were quickly looking for the area where smoking is designated. I contemplated my own reunion with Liz, whom I had just seen in Provo 3 weeks earlier. I wanted to give those around me a beautiful seen of friendship to behold. Instead, when Liz pulled up I gave her a good hug and then we sat in her beat-up van a minute longer trying to read the map to find the nearest Whole Foods grocery store.

Yup, that was our first stop—a grocery store. But not just any grocery store. I secretly hoped that Curtis Stone of Take Home Chef would find us drooling over the lemongrass and galangal and offer to go back to our place and cook us a gourmet meal. Have you noticed when you watch Take Home Chef (and I'm sure you do!) that he only approaches women whose backs face him? I guess it's that element of surprise. Ala

s, I am not 20 pounds underweight and I don't have a very L.A. career like yoga instructor or colon hydrotherapist so I knew my chances were close to nill I'd get picked anyway. I tried to keep my back towards the imaginary camera most of the time, just in case, to no avail. Curtis never showed, so we took matters into our own hands. I had to make two trips to the produce department just to look at the most beautiful vegetables I had ever seen. Liz and I settled on purchasing watercress and radicchio for a salad later that night.

I kept telling Liz that I could never be satisfied by Macey’s Grocery store in Provo again after that trip to Whole Foods. It was an international smorgasboard. We sampled everything we could get our lips on—kalamata olives, freshly-seared scallops, Brussels sprouts, mini fresh mozzarella balls, Israeli couscous, cranberry tuna salad and chicken korma. (Bombay House still makes the best chicken korma.) Yes, we were gluttons. It was almost embarrassing, but not enough to stop me. It was like being at Costco only instead of sampling Boca burgers (truly the only way you could get someone to eat those rubber hockey pucks) the samples were actually good.

We then went on to Pike Place market where we continued to eat things like Baklava and fresh donut holes. Liz of course had to buy a butter and ham sandwich at the French bakery. I think it’s hilarious—a sandwich made with a baguette smeared with just butter and layered with ham. It sounds so appetizing when Liz says it in French, but basically it’s a butter sandwich. That’s why Liz has never bought margarine—because the girl eats butter sandwiches. She should watch Paula’s Home Cooking……

The weekend continued and was a smashing success in terms of rejuvenating me—great restaurants, great sights, hikes in the rain, etc. It rained every day, all day, and that only added to the romance of it all. We ate at great restaurants like Primo Grill in Tacoma where I tasted the best polenta I’ve ever eaten. Try the recipe from their website—it’s addictive. I’ve made it twice since eating there. And I am so proud of my glass bowl purchased at the Childhood’s End Gallery in downtown Olympia where they feature handmade art glass from Glass Eye Studio. Liz explained to me that just as Utah is known for faux flower and twig wall hangings, Washington is known for blown glass. Was that a dig? Just remember Liz that people who live in glass houses shouldn’t throw stones. After all, Provo doesn’t have a resident who roams the streets wrapped in Christmas lights while pulling a generator on wheels so that he can constantly be lit up like Olympia does. Nor do we have a parade called the Procession of the Species where people add wings to their bikes so as to imitate butterflies. Mmm-hmmm.

But all good things must come to an end, so I boarded my Southwest airlines flight Sunday morning carrying my treasures and said good-bye to The Emerald City. What a weekend.
5 comments: