I am almost angry at how yummy this dish turned out. I mean, who makes homemade nuggets? You buy them frozen and heat them up for your kids while you eat something yummier. But I ran across this recipe on Cook’s Country and thought it sounded easy and delicious. So I gave it a go. And wow, best chicken nuggets ever. And not just kid food! 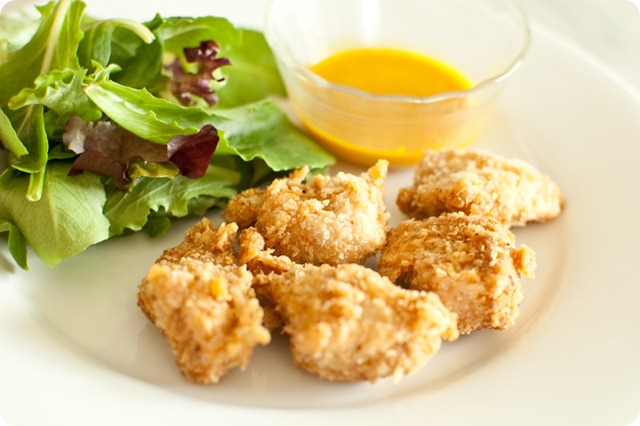 So then why am I angry? Because they are so dang good I’ll have to keep making them as my kids begged, “Please make these again!” And because I hate making fried food for the simple reason I just never seem to know what to do with the leftover oil. Do I dump it? What a waste! And then storing it is kind of messy too—pouring it back into a jar. And then how many times can I reuse the oil? These are all my own problems and not problems with the recipe so I’ll shut up now.

And equal parts honey and mustard made the best honey mustard dipping sauce. I don’t think that’s included on the recipe print out but it is mentioned in the video at their website. So many of their recipes call for Panko bread crumbs that it’s become a staple in my house—deserving it’s own Tupperware container in my pantry.

Find recipe at Cookscountry.com or by clicking here: Chicken Nuggets

It’s currently free but only for the current season I believe. If you can’t tell by my previous Food/Recipe posts, I am obsessed with cooksillustrated.com and their sister sites too.

Caring for My Sweet Daughter

On February 15th 2012 my sweet 11 year-old daughter Ilene had spinal fusion surgery to correct a condition called spondylolisthesis. One of her lowest vertebrae was 65% slipped over the one below it. We may never know what caused it but we think it was brought on by a fall 6 months ago. She slipped on a pile of sheet protectors on the floor while helping her Aunt get her classroom ready and landed on her back. She was sore for a few days but we didn’t think much of it, after all, kids fall all the time. But in January 2012 she started complaining that her hamstring muscle hurt on one of her legs. And then she started walking funny—like a duck. Her torso was way forward and her lower half was a couple inches behind her. She said it hurt her leg to try and walk straight. So we took her to the doctor, had x-rays, were referred to an orthopedic  surgeon at Primary Children’s Hospital where we were told she need surgery to correct her spine. What? Our healthy little girl needed major surgery? They would make room for her the next day to be operated on.

After that initial appointment on Feb 14th with orthopedics, an MRI was ordered for later that afternoon. We asked Ilene what she wanted to do to pass the time until her MRI. She asked if we could go to Temple Square. You bet! Here’s Ilene on that cold but sunny Valentine’s day: 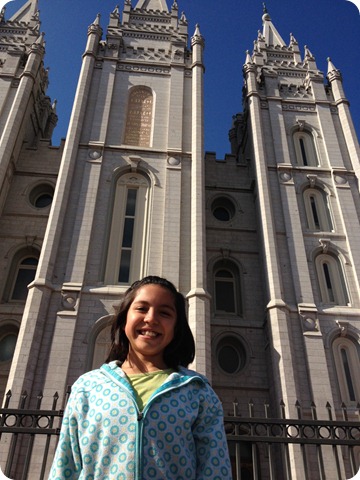 This is how Ilene normally is: 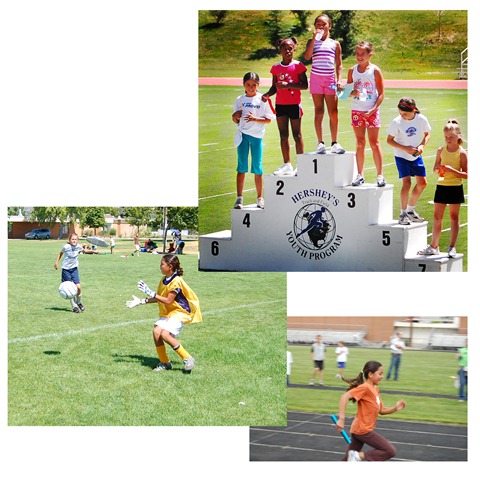 She’s a runner, a soccer player, a very active girl who is always happy and the kindest person. She’s a true joy to our family. We went home and cried out of fear and sadness for our little girl. I think this has been the hardest trial we’ve ever been through. It was so hard to hold back the tears in front of Ilene (Paul failed miserably—crying in front of Ilene lots) but we prayed for her and she received a Priesthood blessing from Paul and my Dad. We felt at peace and grateful that Ilene would be made whole again.

Ilene’s surgery lasted three hours. This is how the days were spent in Primary Children’s Hospital in Salt Lake City—attached to oxygen, morphine drips, and eventually working with physical therapists to start to sit up and walk again. (February 15-19, 2012) Sometimes her pain management was literally taken minute by minute—a cloth on her forehead, vomiting, wiping her tears, ice chips in her mouth, and eventually a change from Morphine which was making her nauseous. I held her hand and told her I loved her. What else could I do? (Ilene gave me special permission to post hospital gown photos of her.) 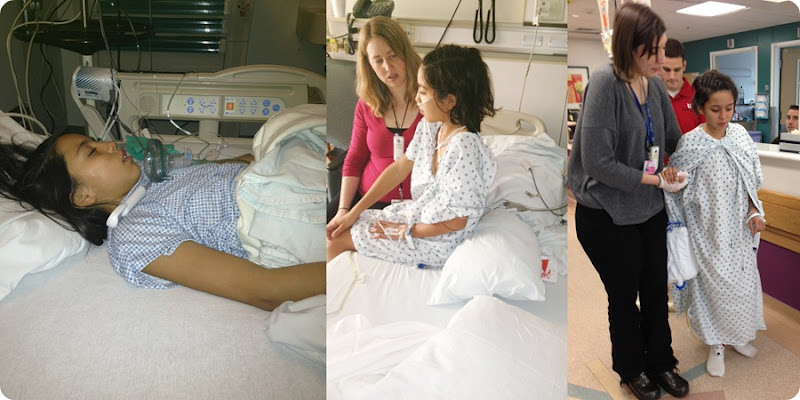 Her dad and I were heartbroken to find out Ilene would need such major surgery and then would need to recover for 6 months. For six months there will be no bending, twisting, running, lifting, or soccer playing. Her bones need time to heal with those new titanium screws in her back. That sounds tough, but we’re just so grateful that she’s going to be okay that we’ll do whatever we have to do to protect her—wrap her in bubble wrap if we have to.

I still have to help her get out bed, use the bathroom, walk, pretty much everything. I read to her, play games with her and watch Doris Day movies together. But she can roll over in bed now and is starting to walk just a little faster these days—still with me or Paul attached to her arm. The road is long, but with God, nothing is impossible.

I love cinnamon bread. Who doesn’t? But the guilt overwhelms me when making this treat more than once a month so I decided to make a healthier version using 1/2 wheat flour instead of all white flour. Also, I eliminated the butter and milk and use canola oil and water. I don’t even notice the difference. My original recipe started from The America’s Test Kitchen Family Baking Book. One of my favorite cookbooks.  (Try the 5minute drop biscuits recipe in that book as well.)

Here is my updated healthier version of my favorite afternoon snack. And now that it’s all healthy, I’ll let the kids have it for breakfast as well. You can hardly tell the below image is 1/2 wheat and 1/2 white don’t you think? It will fool everybody. 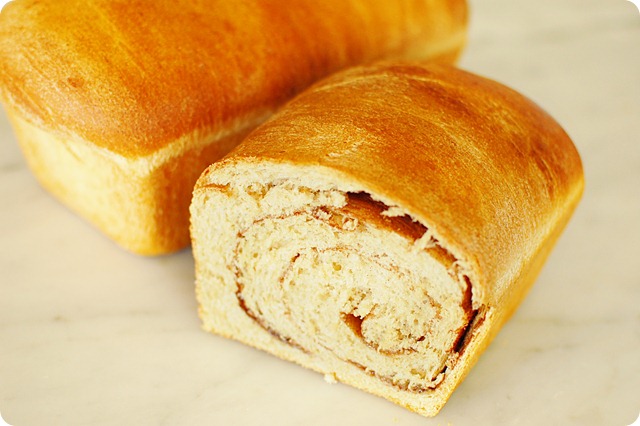 Cinnamon sugar mixture for filling: 1/2 cup white sugar, 1/4 cup brown sugar, 3-4 teaspoons cinnamon (You might need to double this mixture, but usually I just go heavy on these measurements and that makes enough for the filling.

Combine the two flours, white sugar,  and salt in your Kitchen Aid mixer. In a measuring cup mix the warm water, the canola oil, egg yolks and yeast. Pour the liquid into the mixer bowl and on speed 2 knead the dough for 7-9 minutes, adding the last cup of white flour if necessary. You want the dough to be tacky but also scrape the sides of the bowl. Let the dough rise 1 to 2 hours, covered, in a greased bowl until doubled. Divide the dough in half and press into two 8x20 inch rectangles. Mist dough with water bottle. Spread with cinnamon sugar mixture. Mist again very lightly and roll up, pinching the seams shut. Place in oiled 9x5 inch loaf pans and rise another hour, covered with a tea towel. Bake at 350 degrees for 40-50 minutes or until thermometer plunged into center of loaf is 180 degrees. Remove from pans immediately, cool 20-30 minutes and eat with butter. Or no butter if you are being extra healthy.