Is it too housewife-y to wear an apron all day? Because I have been wearing this apron all day. I'm loving all the sewing projects in my new book, In Stitches. Although I

don't think I'm brave enough to wear the apron over jeans out in public like in this photo to the right. I made it this morning at 4am when I couldn't sleep. (Surprise, surprise, I'm the worst sleeper ever. I've already blogged about that.)

I made sure I added the pocket because I once read that if you clean the house wearing an apron with pockets you'll be more efficient. You'll load up the pockets with all the odds and ends--

rubberbands and crayons in my house) and then put them all away in one trip after you're done picking up . Will adding this pocket make my house organized the way buying an ab-roller makes one skinny? You're right, should've added ten pockets.
6 comments: 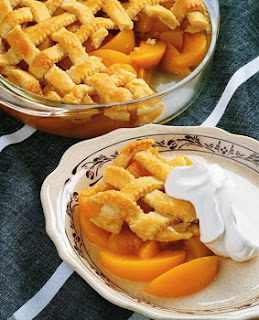 I spent 4 hours today making, baking, and freezing peach pies and peach crisps. (These are my favorite recipes.) Blanching the peaches in boiling water, shocking them in ice water, peeling them, de-pitting the peaches, and slicing the peaches is a lot of work. Adding the sugar, the tapioca/flour, and then the cinnamon and nutmeg (the secret) adds to the work. And that’s just the filling. Then I gotta make the crust—making the dough in my Cuisinart is the easy part. Chilling it, rolling it, and placing it in the pan without ripping it, is the hard part. I should’ve taken a picture of my kitchen today after I was done. I had three stations set-up—all in disarray by the end. Hallie added to the tornado-like mess when she decided to roll out the pastry scraps with her baby rolling pin. She managed to get flour everywhere, even into the keypad of the cordless phone. And then of course because it’s a butter pastry, it eventually melted and so Hallie left butter glops to clean up as well. Thanks sweetey.

So where did the phrase ‘easy as pie’ come from? True, anyone with a few brain cells who can read a recipe can make a pie, but it takes a long time and it is very messy. I think this phrase is misleading—pie easy? Yes. But it’s also messy, time consuming, and tiresome. Now eating the pie, that’s a different phrase. ‘Heavenly as pie’ or ‘sinful as pie’ all describe the eating. But as for the work, I’m changing the phrase to ‘as messy as pie’. At least now my freezer is filled with crisps and pies to last me through the winter. Happy tummy, aching feet.
8 comments: 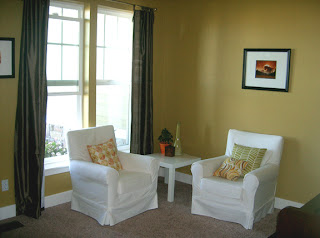 It's All (American) History

I’ve always loved American history. I’m terrible at dates, I can never remember where the Civil War started (was it Antietum or Bull Run?), and I forget the order of our first presidents after Jefferson. With that disclaimer, you can see why I didn’t major in history at BYU although I still think I’d make a great high school history teacher. It was tempting to switch my major from business to history once my roommate Kathy told me that history majors only had 32 credits in their department and us business majors had 52. That sounded more like a degree in electives to me than history! If it weren’t for my lack of gray matter in the memory department I would’ve signed up. I’m always up for less work.

I’m always telling Paul that he may be smarter when it comes to academics, but when it comes to mindless trivia, I blow anyone away. And American history is no exception. Thanks to my high school AP History teacher, Mr. Clark, my brain is infused with the nicknames of presidents and weird American catch phrases. Despite the widespread use of computers a decade earlier, his tests were always hand written and then copied for us students. A groan was always let out by our class when we would invariably get a nine page history test. We quickly scanned the test ‘packet’ and realized the length was due to his large male-style block print. And the tests were always chock full of American trivia, no doubt due to his love of American History magazine. We read more from that magazine than from our textbook. Because of his tests I still remember that William Henry Harrison’s nickname was ‘Old Tippecanoe’ and Andrew Jackson’s was ‘Old Hickory’. I’m good at phrases too. I can tell you that it was Teddy Roosevelt who made famous the phrase, ‘Speak softly and carry a big stick’ and we can thank Churchill for the phrase, ‘A riddle wrapped in a mystery, inside an enigma.’ I was definitely surprised when I took the AP History test and learned there were no questions on ‘Old Fuss and Feathers’ nor on ‘Lemonade Lucy’. Nobody passed the test that year. Maybe Mr. Clark revamped his curriculum and eliminated questions from tests like; “Southerners were known for sipping __________ out on the ___________. That honestly was on a test. The answer was, “Southerners were known for sipping mint juleps out on the veranda.” I still remember that and I don’t even drink.

The highlight of our class had to be our ‘fake’ news skits we put on. Our group was assigned to cover the burning of the White House by the british in 1814. I was an eyewitness to t

he event in character of SNL’s Grumpy Old Man. I wore a stuffed plaid shirt, donned crooked spectacles, hunched over, and said things in a raspy old-man voice like, “Why didn’t we just paint a bulls-eye on the darn house for the stinkin’ British? In my day, the president was a humble man, living in a humble house, AND WE LIKED IT!” I got an A.