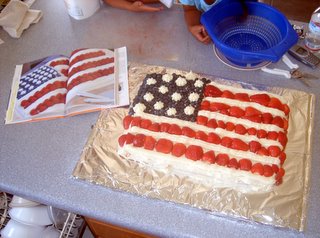 Could I possibly talk about food more than I already do in this blog? Oh yes, and now there is a blog just for that very subject. It's a place to talk about recipes and good food in general.

UPDATE: Sadly, the food blog I started died an ignominious death so I have removed the link.
No comments:

Remember that episode of Seinfeld where George proclaimed the upcoming summer to be the summer of George? In other words, he was going to live it up that summer. He was free from his engagement with Susan, due to her poisoned death while licking their wedding invites. I love that episode. Of course, nothing ever goes George’s way. He slips on some party invites and winds up in the hospital. As the nurses wheel George away he cries out, “But this was supposed to be the summer of George!”

Last weekend I was supposed to have my own Summer of George. Only I appropriately called it the Weekend of Cynthia. I bought myself a plane ticket for my birthday to go see my friend Liz in Olympia, Washington. I was going all alone—away from my demanding children and away from the dishes, laundry, etc. The weekend did turn out to be perfect—once I got there. I did have my doubts though in the Salt Lake Airport.

For those of you who don’t know—I don’t fly well. I get queasy and lightheaded. My motion sickness seems to be getting worse as I get older. I get queasy getting on the onramp of the freeway if it’s a cloverleaf. And I don’t ride Star Tours anymore at Disneyland. I know better. But I digress. I am sure that the persons sitting next to me on airplanes get nervous when I fish out the air sickness bag from the jumbled mess of magazines in the seat pocket. I’ve never had to use one yet, but just in case, it’s nice to have quick access to it.

As the plane takes off I try not to focus on my queasiness but rather on my freedom. Three days sans children. I look over at the lady next to me with her two squirmy children and in the words of Mr. T. I think, “I pity da foo.” (I also remember that Mr. T. didn’t fly well so Face always had to drug him. I’ll remember that for next time.) I turned up my iPod just a little bit louder to drown out her children. Just as I get used to my new found freedom of an entire 30 minutes the captain tells us over the loudspeaker that the plane is broken and we’ll be returning to Salt Lake. Nobody seems to be alarmed, but I am! I am feeling like George Costanza. Nothing is meant to go my way. I won’t be flying to Seattle after all. Oh the inhumanity of it all! “This was to be the weekend of Cynthia!”, I scream in my head. Once we return to Salt Lake we are told to get off of the plane and they’ll let us know soon how the problem is to be solved. They give us vouchers for free food at one of the airport restaurants. Now, in my head I’m thinking airport food is never good. But worse than that—free airport food must be worse. But I do like to medicate with food so I depressingly eat the hoagie sandwich. That sandwich will come back to haunt me. I just know it.

Finally we are routed onto a new plane. After three more delays of broken computers and who knows what else we finally take off for Seattle. I arrive in Seattle three hours late but with spirits high because the Weekend of Cynthia is back on track. I don’t think blogging about digestion is in good taste, but this time I going to make an exception. That sandwich made by Russian immigrants almost ruined the Weekend of Cynthia. I was in denial. I thought my stomach pains could be attributed to the fact that I had a total of 4 take offs and landings the previous night. Twice as many as I was mentally prepared for. For those of you who don’t know, another one of my talents is that I have an iron stomach. What goes down never comes up—ever. After eating a lovely lunch of halibut and crab while overlooking the Puget Sound, though, that rule of mine came to an end. I had such a good streak of stomach health. Now I have to start all over and build up to the next twenty years of my moratorium on vomiting. Once that moment passed my good health returned and I enjoyed the rest of my Weekend of Cynthia. Ah, now my canteen has been refilled and I can go on! Which is a good thing because as I type this I am looking out my window at the snow falling on my brown and ugly treeless lawn. Winter is a devil, but somehow it doesn’t seem so bad now.
3 comments: