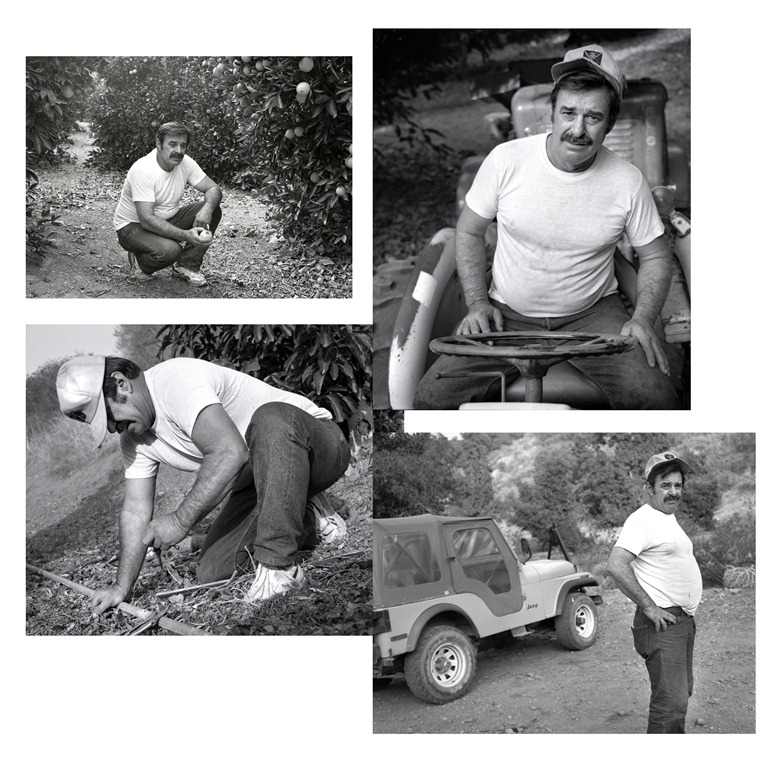 A few posts back I wrote about my Grandpa Ed and the quilt my sister and I were making for him. This week we lost him. I have cried a lot this week—in sorrow at my loss, in happiness at his relief, and in gratitude for the prayers that were answered. For months now I (along with my family) have been praying that Grandpa Ed would be allowed to die soon and end his suffering. But we had a tall order to this prayer and we were very specific. We asked that he get to go soon, that he not die in a moment of suffering, and that he could go quietly in his sleep. The Lord is indeed merciful because that’s exactly how he went. The day after he died I was  reading in my scriptures and read this verse:

“I, Nephi, will show unto you that the tender mercies of the Lord are over all those whom he hath chosen, because of their faith, to make them mighty even unto the power of deliverance.”

As I read that verse I knew instantly that God had heard our prayers and had indeed delivered Grandpa Ed. I don’t usually blog about such personal spiritual feelings, but I felt like I needed to write these thoughts down. My friend Laurie always says that you don’t blog about the really good and you don’t blog about the really bad. Great rule, don’t you think? This blog post is definitely one or the either. Not sure which, probably a little of both.

So farewell to my Grandpa Ed. I hope there are oranges, grapefruits, and especially avocados in heaven because nobody had a ranch quite like his. I cherished those 25 lbs of avocados he’d give me as a Christmas gift when I’d come home at the holidays. He was always generous with me and my siblings and honestly I don’t think he ever said an unkind word to me. As I held his hand the last time I saw him I told him as such. I loved him dearly.

Polenta with Sausage and Mushrooms 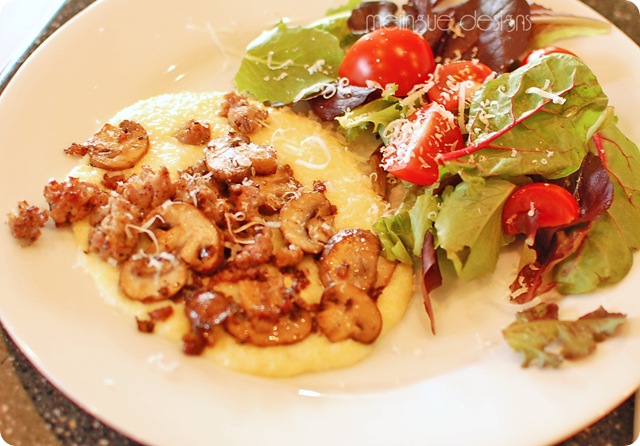 EEE-gads. I don’t think I have written here about just 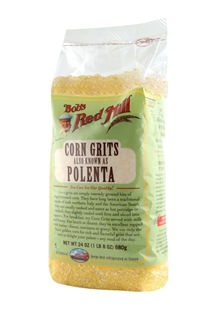 how much I like love adore polenta. According to my culinary boyfriend, Mark Bittman,  polenta is “more flavorful than either pasta or mashed potatoes”. You said it Mark! So yesterday I took his advice and made polenta—the rebellious way—Mark’s way.  I felt so dangerous the whole time! You can read about it in Mark’s column for The New York Times. It was easy peasy. I’ll never make polenta the other way again—stirring, stirring, and more stirring.

I always use Bob’s Red Mill polenta grits as I like their flavor best although I do use Quaker  Cornmeal when desperate. Regular cornmeal is very finely ground and cooks fast. Bob’s Red Mill takes about 30 minutes to cook.

Mark Bittman recommends sausage as his favorite topping for polenta and since I adore him his recipes I knew I had to try to it too. Here’s what I did for my sausage/mushroom ragu.  Goodness, I ate 2 servings last night and then quickly finished off the leftovers for lunch today. I think I need to make it again. Tonight. Ok maybe not tonight, I hate it when I over make my favorite foods and then quickly tire of them. I like to serve polenta for company. Do it.  Your guest will think you’re super fancy.

Brown the sausage in a skillet until almost done. Remove from pan and add sliced mushrooms and 1 T. olive oil. Sauté mushrooms about 10 minutes, stir sausage back in and finish cooking. Add garlic and cook 1 minute more.  Spoon over hot polenta and serve with freshly grated parmesan. Yield 5 servings

It’s sunny, it’s 40 degrees, and I am getting ready for spring! Unfortunately this isn’t my banner. It’s for a client, but I’m making me one soon. I hate being left out. Looks how cute this matches my picture frames? Gimme…gimme… 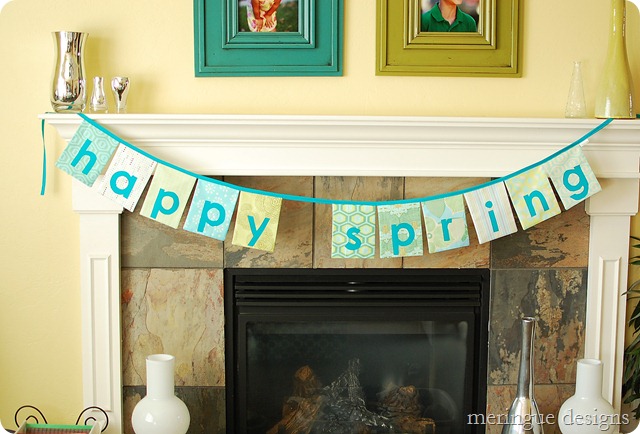 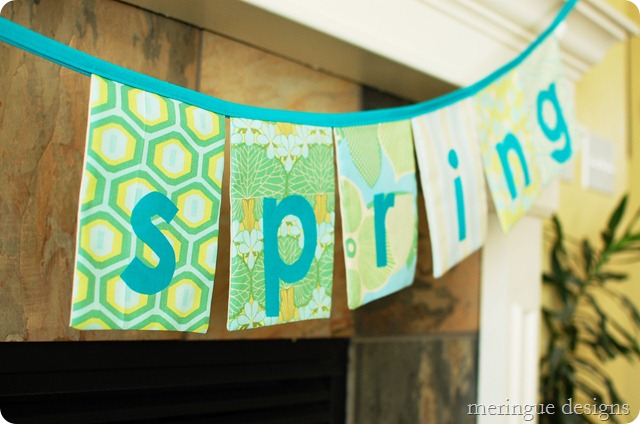 My 12-yr old son loves brownies.  I mean, he really loves brownies. He would marry them if he could, that’s how much he loves them. About a month ago I decided it was time for this boy to learn to make brownies. After all, he is constantly begging me to make him brownies, and really I am just lazy he is 12 and needs to learn to cook more.  And since there really are no great brownie mixes out there, (oh stop, there isn’t) and seeing as it is just as fast to make homemade brownies, I taught Nathan how to make Mark Bittman’s brownies from his book How to Cook Everything. (Have I ever told you that I have a culinary crush on Mark Bittman? Well, I do.)

Fast forward a month later, and Nathan has mastered this recipe—melting chocolate and butter, stirring the dry ingredients together, and adding just a pinch of salt. “Do they really mean a pinch mom?” He has made these brownies at least 4 times, including this week for refreshments for a Boy Scout Court of Honor.

Nathan: “Mom, I need to bring a dessert to the court of honor.”

Me: “Good thing you know how to make brownies now, isn’t it?”  He was happy to do so, he’s just concentratin’ real hard like in this photo. 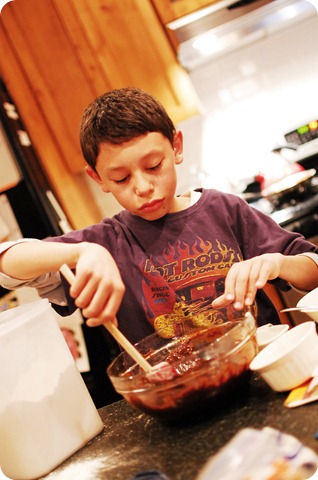 Brownies (by Mark Bittman from How to Cook Everything)

Preheat the oven to 350 degrees. Grease an 8-inch square baking pan. Combine the chocolate and butter in a small saucepan and melt over very low heat. Transfer to a bown and stir in the sugar. Then beat in the eggs, one at a time. Gently stir in the flour, salt, and vanilla. Pour and scrape into pan at bake 20-25 minutes. Please don’t overbake, you want them just slightly gooey.

And for his birthday, Nathan wanted brownies again. But you gotta have fancy brownies for birthdays so I called my SIL Ilene and asked her what to do. She said to try Barefoot Contessa’s Brownie Tart. Oh, yea, huge hit. I mean, HUGE hit. And just as easy as the aforementioned recipe. Only fancy. Because round tart pans mean fancy and French. So take your pick! 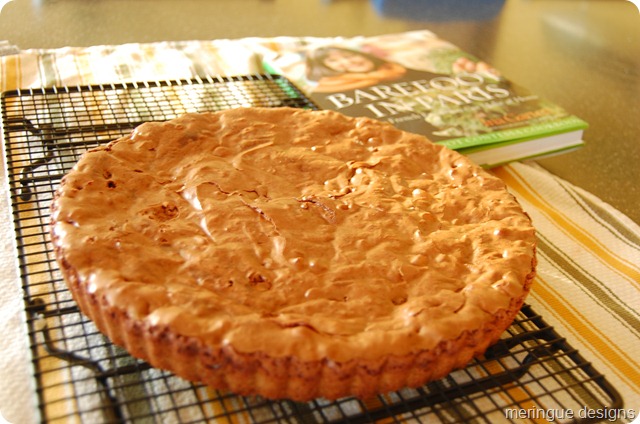 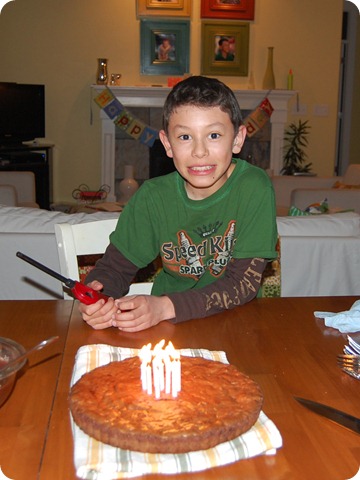 I got some great new fabrics in—Nicey Jane by Heather Bailey. They are springy, lovely, and dominated by turquoise. Well, at least the ones I purchased have lots of turquoise. New cottons make me giddy and happy to enter my sewing room again. Which is good because we were just hit with another horrible snow storm. Adding my bird design didn’t hurt either, you think? 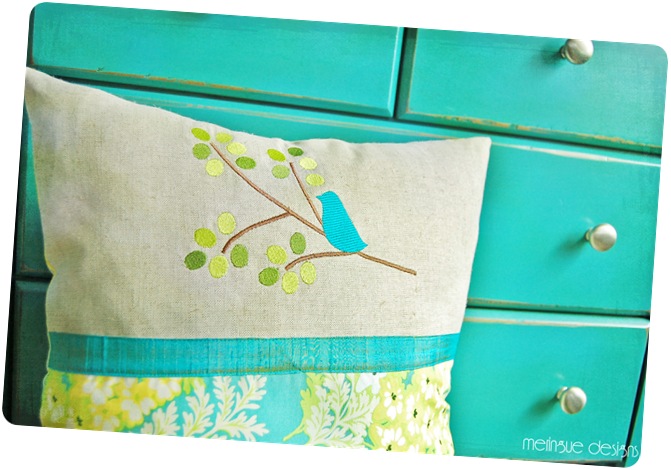 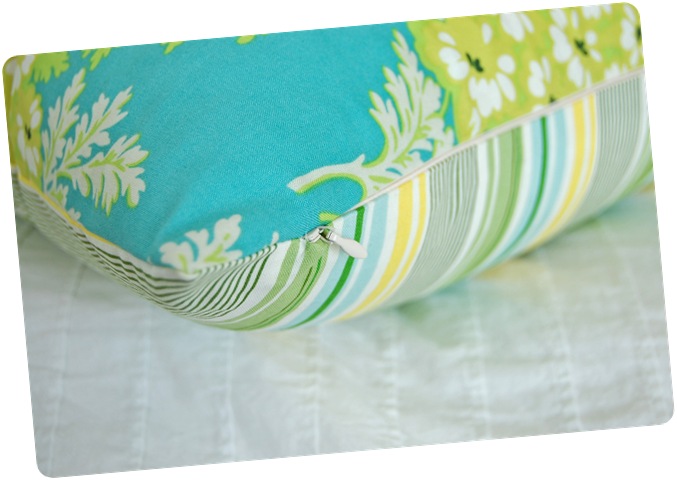 The other day I noticed my 6-yr old making some peculiar devices for her stuffed animals. She was very focused and very meticulous about her project. I asked her what she was making and she said she was making hats for her toys out of Magnetix. How sweet I thought! Once she was done, I was called to her room to behold her creations. and here is what I saw: 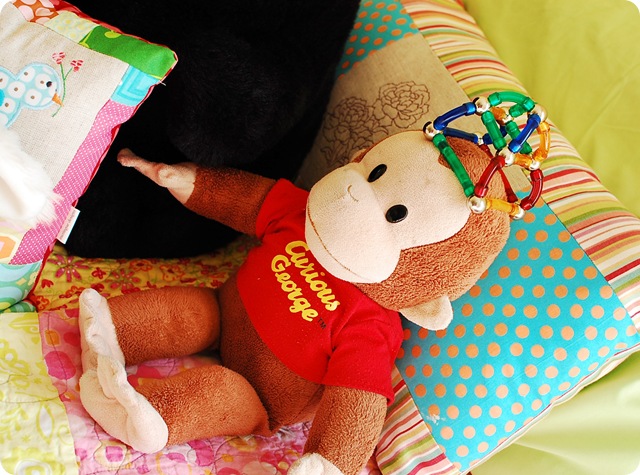 Hats my foot! Hallie had figured out a brilliant way to make all her animals tell her their deepest darkest secrets. Each confessed, particularly the innocent looking white dog, that it was they who messed up her room each day while she was at school—throwing clothes everywhere and tossing candy wrappers negligently among the bed sheets. I am no scientist, but I’m guessing the magnetic field produced from the Magnetix create a sort of reverse osmosis where the truth is literally sucked from their polyester stuffed brains. Move over Dick  Cheney, there’s a new girl in town and she doesn’t need water, nor a board. That’s my girl! 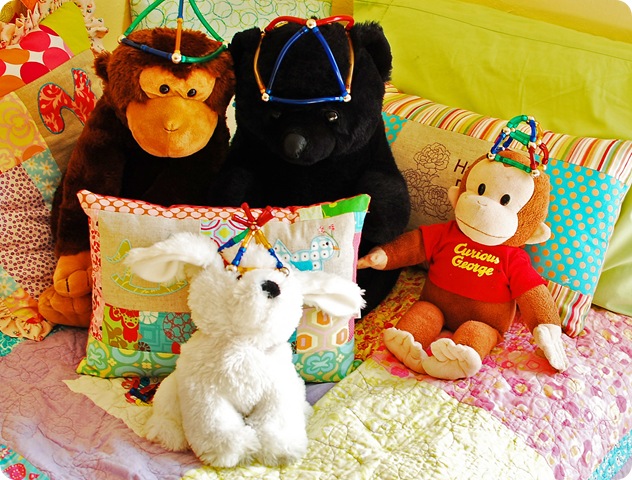