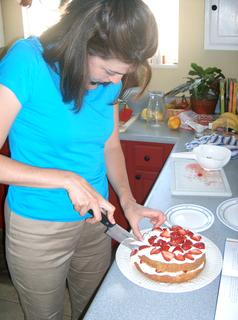 (Photo: Here I am slicing a gorgeous Strawberry Cream Cake. Wow, it was good.)

I am a food snob. I don’t want to be labeled as such, but nonetheless, it is true. I think the definition of a food snob should be added to the dictionary and this is what it should read:

Food snob: noun, a person who looks down on chain restaurants, refuses to eat Hamburger Helper or other such packaged “food”, never uses dried parsley—always fresh and preferably flat-leaf parsley, and always insists on bringing at least 1-2 items to a potluck in case there is nothing else at the pot luck worth eating.

If you do not fit the above definition I urge you to stop reading now as some of the following may offend you non-finicky eaters out there.

If that definition still leaves you in the gray area of whether or not you too are a food snob, read the following 2 paragraphs.

I have six types of rice in my house: Arborio rice, Basmati rice, Calrose rice, Jasmine rice, Orzo (okay this is technically pasta but I make it like a pilaf so that counts as rice to me), and regular old long-grain white rice. I rarely use the latter because it is bland and tasteless. It’s still okay for pilaf though. Do you agree with me on this one? If so, keep reading.

I do not buy margarine to bake with. (I do however buy Canola Harvest margarine spread for toast because I have inherited from my mother her high cholesterol.) I only bake with butter—especially cakes. A cake made with shortening or margarine is tasteless. A cake made with butter is magic. I do not like cakes from a mix. Chocolate is the only suitable cake from a mix, and only in a pinch. I only use mixes for last minute cupcakes for my kids. (See—they are not total food snobs yet.) Do you agree with me on this cake thing? If so keep reading. If not, I take no responsibility for hurt feelings that may result from reading the following. If you have cooked with canned cream of mushroom/chicken soup in the last year you are forbidden to read any further!

Have you noticed that we food snobs say the stuffiest things? My friend Liz is often quoted as saying, “I could hardly choke it down.” My friend Kelly says, (in reference to Applebee’s or TGIFridays), “I can make better food than that.” And then there are my own comments. Taco Bell is referred to as Toxic Hell.

Speaking of Taco Bell, that’s really when my evolution into food snobbery began. It was approximately 1984 and I was 10 years old. My family and I had been on a camping trip in Yosemite for two weeks. On our way home, in Bishop, California my parents reluctantly stopped at Taco Bell to get some food for us. I say reluctantly because my mother is from Mexico and I think this is her one lapse in judgment when it came to eating “Mexican food.” Anyway, every one gets their nasty “Beef” Tacos and I refuse to eat anything. We are at least another 5 hours from home and I, a 10-year old kid, would rather go hungry than eat that Textured Vegetable Protein garbage stuffed in a “shell” and sold as safe for human consumption. (Shells are found on the beach, not in restaurants!) Thus the downward spiral into food snobbery began.

It’s not enough that I am a food snob either. I am determined to force my children into having such a discriminating palate. I’m not doing too bad either. Their favorite restaurant is Bombay House—spicy Indian cuisine. Yum. Sometimes I’ll have Paul pick up take-out on his way home from work. This always disappoints Nathan because he says the food tastes better if you eat in the restaurant. That’s my boy! And how many kids know what a citrus reamer is? My 4-year old daughter Ilene does. That’s my girl! They rarely drink soda and I don’t think they even know what a Twinkie is. (Just as yours don’t either Liz!)

Okay here’s a funny story: My friend Kelly’s husband was complaining to her that at Scout activities they like to make something they call “Peach Cobbler”, which consists of canned/fresh peaches spread in a Dutch oven with a yellow cake mix mixed with a can of 7-up spread over the top. Then you bake it. Then you eat it. Then you vomit. Okay, maybe you don’t vomit but you should. Anyway, a few weeks ago I was camping with most of my family, including my two sisters Patricia and Carolyn. I barely heard Carolyn say “cake” and “soda” in the same sentence to which Patty then “shusssed’ her. “Excuse me!”, I say. “What are you talking about? Are you going to make peach cobbler with 7-up! I don’t think so.” Patty then defends herself, “It’s really good!” Apparently they weren’t going to let me in on this secret recipe hoping that I would take a bite of this poison and declare it’s the best dessert I’ve ever had. Oh, and did I mention they were going to use DIET 7-UP?

Now I could go on and on with food horror stories like these although I know if I get too specific that this will somehow be read by the offenders and my aim isn’t to personally hurt others but rather to create a few chuckles.

Oh, dang it! I can’t resist. I will be as ambiguous as possible so as to protect the innocent.

I know someone who stacks processed cheese slices and grates them on her box grater to make Cheeseburger Tacos. She is so proud of these and I am glad that she loves them. She is a wonderful person, but come on, that’s disgusting.

I had a roommate who made another atrocious concoction. She crumbled saltines and mixed them with tuna and cream of mushroom soup. Then baked it. Then ate it. It seriously looked like cat vomit. And this is coming from someone who did have a lapse in food snobbery during her college years. I confess I did eat packaged mac n’cheese and ramen noodles quite a bit. Okay, I still like ramen noodles. There, I said it. So I guess I am not a full fledged food snob yet if I still like ramen, but I find that I am getting worse as the years go by. All this talk about food is making me hungry. Pass the Doritos.
2 comments:

Mother of the Year 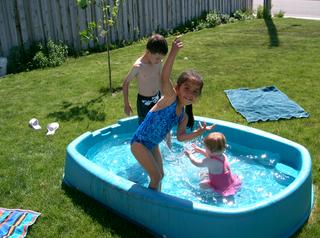 I always thought I would be a good mother. I sort of think I am (how’s that for positive affirmation), but still, there are those times when I am positive that I will not be getting the mother of the year award. Once you read a few of my tales you’ll know why.

I never thought I had a temper. I never hit anyone growing up as a child—even if they deserved it! Oh sure, I would throw shoes at my sisters (whom I shared a room with growing up) when they wouldn’t shut up in the middle of the night. I guess I figured there was nothing like a Vans sneaker to hit you in the face to make you want to go to sleep. But still, they provoked me, and I still mistakenly believed I did not have a temper. Then I became a mother. I was giving my then 2-year-old daughter Ilene a bath but for some reason my then 5-year-old son Nathan was driving me nuts in the bathroom. I asked him to go out, so he did, but of course, stood just barely outside the bathroom door as to still annoy me with his pleadings, whinings, etc. So I reached behind me, and without looking, slammed the door shut. The next thing I know Nathan is screaming LOUDLY because his finger is stuck in the door. Oh yes, I slammed his finger in the door and ripped the tip of his finger off. We quickly called our neighbor over to stay with Ilene while my husband and I drove Nathan to the after-hours clinic where they sort of offered us plastic surgery to fix his finger, or was that when his little friend Rachel split his forehead open last year with a toy piano? In either case, we opted to forgo the plastic surgery and put this whole mess behind us. Nathan still reminds me of this “incident” to this day.

Then there is the recent “incident” with my baby girl Hallie. Just as I thought I never had a temper, I always thought I was a patient person. A couple of months ago Hallie was going through a terrible phase of not sleeping through the night. After X plus days of being a zombie and not sleeping through the night I had decided I had had it with this nocturnal baby. After all, the pedicatrican’s number one advice is that “a baby can sleep through the night by 6 months.” Fine. Whatever. So I decide that tonight is the night to ignore the screamings. Afterall, every other night I went in her room to see why she was crying she was fine. Not wet, not hungry, just not happy. So on this night she started her usual axe-murder screams at 3am. (You know, the screams some children/babies make in the middle the night for no other reason than there must be an axe murderer standing in their room!) I ignore her. She screams off and on for 2 hours! I refuse to go in. Don’t ask me how my husband Paul and two other children can sleep through this, but that’s another blog. So finally by 5:30am I decide to go in and get the little twit. After all, the alarm is set to go off at 6:15 and I surely am not going back to sleep so angry so I might as well get up. I go into Hallie’s room and to my HORROR discover that she is sitting in the rubble of her broken crib. Oh yes my friends. Hallie’s crib had collapsed some 3 hours ago (just a good guess) and she couldn’t quite go back to sleep with her crib mattress at a 45 degree angle. And of course she was trying to sleep head down too, so all the blood kept draining to her poor little head. I gasp and reach down to pick up my baby out of the rubble that was once her crib, holding back my tears. I go back to my bedroom and wake Paul: “Hallie’s crib is broken that’s why she hasn’t stopped SCREAMING!” That’s code for: “Go fix Hallie’s bed.” So he does. The next day I quiz the kids to see if they know any reason in the whole wide world why Hallie’s crib would break. Nathan confesses that a few days ago he and Ilene were playing under the crib when it broke. They kicked the mattress up to see if that would fix it, and to their surprise, it did! I can’t believe it held as long as it did. Obviously I’ve missed a few parenting classes. Oh and to sum it all up: I discovered not lack after this that Hallie was teething and getting 8 teeth at once. Gee, that might be why she was screaming. Mother of year, that’s me.
No comments: