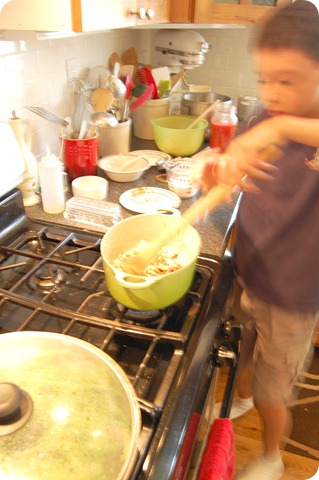 I have an addiction to Bombay House here in Provo. It’s food so good you moan when you eat.  Or at least I do.

So when I saw a recipe for Chicken Tikka Masala on the cooksillustrated.com website I knew what we were having for dinner on Sunday night. Oh my—it’s spicy, creamy, sweet, and filled with aromatic spices. (Yes, I know Cooks Illustrated is $30/yr but it’s the best money I spend every year.)

Does it get better than Indian food?

Nathan is slowly learning to cook more than homemade brownies so when he asked Sunday night if he could help, I picked myself up off the florr, and happily turned the reigns over to him. Well, I held the reigns but he did all the grunt work.

He pressed garlic, measured coriander and garam masala, sautéed onions, etc. Ilene peeled the ginger which is the perfect job for children because you peel ginger best with a spoon—no knife to freak this mama out.

Cooking the meal took twice as long as it would had I done it alone, (Paul was napping!) but I guess that isn’t the point. I want my children to know how to cook amazing food when they leave the nest someday. 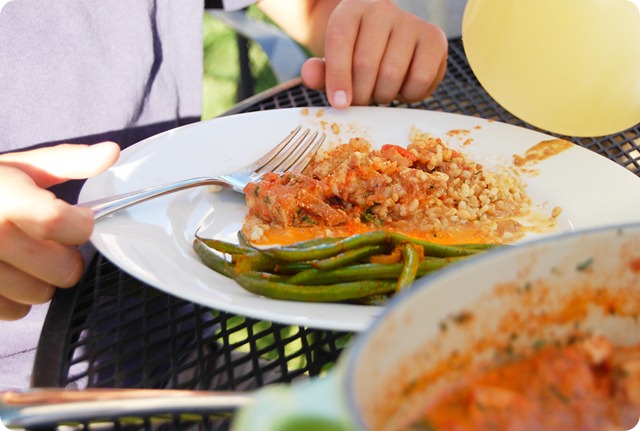 To make the Curried Green Beans:

Saute about 1/2 of an onion in 1 tablespoon of butter along with 1/2 teaspoon of ground coriander. Add the haricot verts (thin green beans from Costco, not the thick ones!) and 1 tsp. mild curry paste and salt to taste,  and stir fry 5-10 minutes until desired doneness. Fantastic! 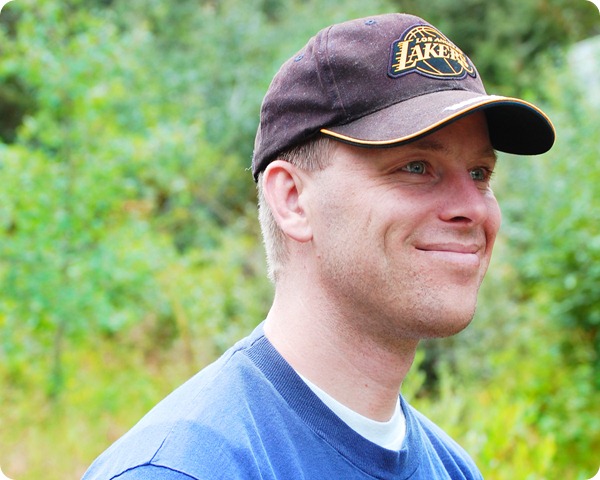 Today is my hubby’s 39th birthday. Yikes, when did we he start getting older? Time flies when you’re having fun, so maybe that’s why the last 15 years have flown by with Paul at my side. He is my best friend and an all-around great guy. All right, enough mushy stuff, like you care. Here are a few juicy tidbits about my main squeeze.

1. When we were first dating Paul gave me a push-up eraser for Valentine’s Day. Yup, an eraser. In his defense, cause heaven knows he needs one, we had some business classes together and I always needed an eraser. Always. Goodness knows why I never had one, so I was always borrowing the eraser off the cute blondie sitting next to me.

2. He also gave me The Little Prince along with the eraser with a sweet inscription, which makes up for #1.

3. On our first date, my 20th birthday,  he took me to see The Most Happiest Fella at BYU while he was also secretly plotting a surprise birthday party for me with my roommates. That was the first birthday party I’d ever had.

4. Paul loves Rocky Road ice cream (I hate nuts in desserts) and he always seems to have a smirk on his face while eating it straight from the carton. The smirk says, “Oh yea, this is all mine and I don’t have to share it at all with my nut-phobic wife.” Devious, I know.

5. Paul is not a talker. He just doesn’t have much to say most of the time. I often know when he is going to speak because he clears this throat. Imagine, going through life not speaking often enough that one has to clear his throat to be physically prepared to utter noise?! I have never had this problem.

7. Paul is OMDs biggest fan. Yup, the 80s band, as in the scene at the end of Pretty in Pink when Molly Ringwald finally kisses Andrew McCartney. (Two of the most unlikely teen heart throbs in my opinion. And because Andrew McCartney was such a hit in this movie he went on to star in the blockbuster, Mannequin. But I digress.) Paul regularly checks the OMD website. He is such a fan he even has limited edition CDs from them that come in blue suede boxes.

They matched his blue suede Vans as well. That was a purchase before he married me, the shoes and the CD. 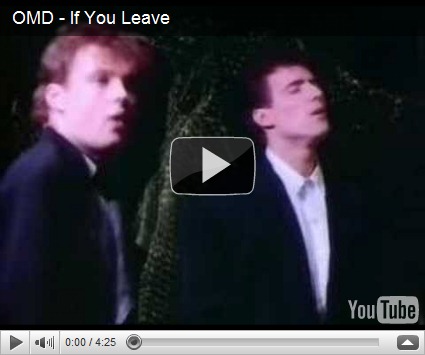 8. Paul is a Lakers fan. You can take the boy out of Southern California, but you can’t take the….well,you get it.

9. Paul was born to be an accountant. As a child he had a paper route and to pass the time he would make up games to go along with his ‘client’s house number.  For instance, Paul’s address was 21742, so mathematically he remembered this by “2 minus 1, plus 7, divided by 4, equals 2”.

Yup, I am frightened, yet laughing at the same time. Can you say Rainman?

10.  Paul has been re-loading the dishwasher for 15 years as well. Ok, we didn’t have a dishwasher when we were first married and living in Grapes of Wrath housing, but for say, 14 years now, he comes up behind me, after I’ve loaded the dishwasher and silently reloads it to its maximum capacity. I think this is truly a waste of time but hey, does a gerbil care if it doesn’t get anywhere as it runs on that stupid wheel? Nope, he’s just happy to keep doing it, day after day, year after year. Paul and the gerbil, I  mean.

So happy birthday to my favorite man. He wanted a lemon cake for his birthday so we’re off to fill our cake holes with pound cake and raspberries too.

Ain’t he lucky to have me too?

I still have no camera.
It’s killing me.
I can’t post any new designs on my etsy shop without a decent camera so I have no motivation to make anything new. Oh please Nikon elves….fix my camera faster and send it back to its happy home into my loving arms! Please? (*anxiously biting nails*) So I’ve just been filling orders like crazy…..sewing away the hours of the day on this machine while listening to books on CD. (Thanks to my sister in law for convincing me that books on CD are sheer awesomeness. I’m a new convert.) 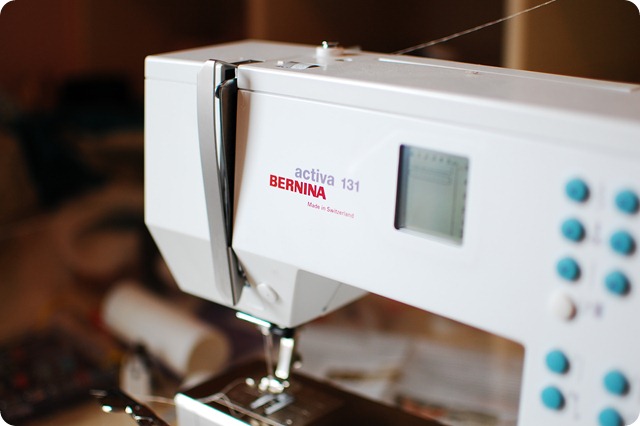 And because I am a multi-tasker,  the below machine embroiders magically away, while I sew on the above machine and while I listen to books on my laptop, while munching smoked almonds. Now that’s a hard days work. 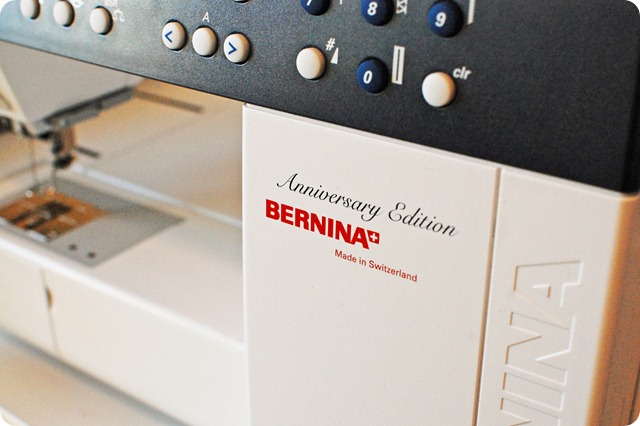 I am now at phase 2 of motherhood—the Daytime Empty Nest Phase. After having my children in the home nearly constantly for 12 1/2 years straight (those piddly 2 hour breaks for kindergarten don’t count, more trouble than they are worth), I am child free for most of the  week days. Phase Two of motherhood is fantastic. No one yells at me, no one spills strawberry jam on the floor, nor is any one following me around saying, “Why not?” for a good portion of daylight hours.
Oh blessed day!
I shower when I want, eat my breakfast when I want, exercise when I want, shop when I want, work when I want…..even read a book in the middle of the day….just because I can. I have talked to other moms who are also entering Phase 2 of Motherhood and some have admitted to being (gasp) sad.
Huh? Uh, baking powder? (Name that movie.)
I become speechless when I hear such utterances. I have plans….oh I have plans!
And taking up piano lessons again are part of those plans. I can play ok, I used to play well, but these days I just slog my way through most pieces. But Phase 2 of Motherhood is spurring me on to great heights! That and I was released as the YW president in my ward….so time abounds!
Stay tuned.
12 comments: