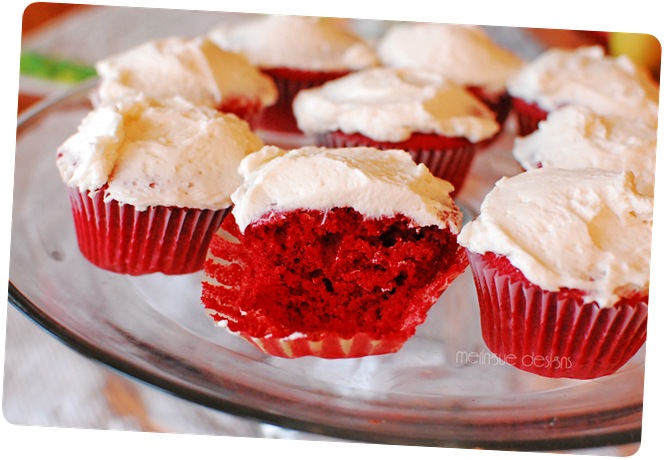 Cupcakes are in. Red velvet cake is in. But red velvet cupcakes are very in. Yesterday I attempted to make this southern delight for the very first time. And I was not disappointed. 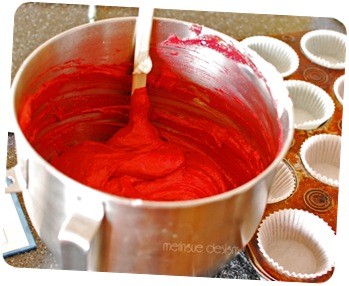 Trust me (or not) they taste even better than they look. Of course, I went to my favorite book for baking. I was drawn to this recipe over every other recipe I researched on the internet because this recipe used the nectar of the gods--butter-- instead of vegetable oil. I knew that would make a cupcake tasty enough to eat without frosting. Not to worry, I topped them off anyway with a vanilla icing good enough to make your eyes roll back. My kids loved them, the hubby loved them, and I even sent one home with a drooling neighborhood child who longingly watched me ice them. The only stressful part was begging the kids to not stain anything with their red fingers as they licked the bowl. 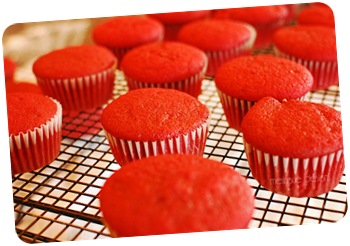 Preheat oven to 350 degrees. Mix butter and sugar with electric mixer until light and fluffy. Combine flour, soda, salt, and cocoa powder in a separate bowl. Combine the rest of the wet ingredients in a large measuring cup with a pourable spout. With mixer on low speed, add 1/3 of the flour to butter mixture, followed by ½ of the buttermilk mixture. Repeat with half of the remaining flour mixture and the remaining buttermilk mixture. Beat in the remaining flour mixture until just combined. Fill cupcake tins ½ full. Bake for 20 minutes. Cool, then frost. (Frosting: Beat 1 ½ sticks of butter, 2 cups powdered sugar, and 2 T. cream, splash of vanilla, till light and fluffy.) Can also be frosted with your favorite cream cheese icing.

*For Utah high altitude modifications (4500ft.) , I did the following: Add 2 extra T. flour and only 1 tsp of soda. If you live at high altitude and do not make these changes, your cupcakes will be too wet and probably ‘cave’ in during baking.

April 5, 2010: I am adding this to one of my favorite websites—iheartfaces, hence the button added here.

and I LOVE that quilt you made for your grandpa. My dad's close friend died from that disease...it is so sad and so awful. But I'm sure your quilt will bring him some comfort and happiness! You are so talented!

Wow!! Cynthia these cupcakes look so good --Why are you so far away in UTAH. I'll have to try them.

AAAArrrrrggggghhhh! You are torturing me! One bite would mean 15 units of insulin! Whew!

YUM! Now I wish you had taken the time to make them for our laurel cupcake activity so I could have devoured an unfair share.

Ok, Martha. When is enough enough?